During the holidays there are a lot of great foods you can make, but one of my favorites is smoked ham. Most of the time when you buy a ham at the store it’s already been smoked, which means if you throw it on your Traeger, it’s double smoked! This double smoked ham recipe will make you the hero of your next holiday celebration.

One of the great things about this recipe is that the ham is already cooked – If you buy a bone-in smoked ham all you have to do is heat it up. You can certainly mess this up if you go too far off the grid with your cooking… but this method will do you right.

I’m using a bone-in ham that isn’t spiral cut already, but you could use a spiral cut ham for this recipe too. The ham stays moist because of a tasty rhubarb and onion glaze that adds some incredible flavor.

The first thing you want to do is cross thatch the surface of the ham with some shallow cuts. At the intersect of each cut, place a clove. This can be a little bit tedious, but the flavor really comes through, and it’s totally worth it. Once you’ve placed all the cloves put the ham in a large baking dish and then put it in your refrigerator for 30 minutes. The colder your ham is when you put it in the smoker, the longer it will smoke, and the tastier it will be.

This glaze adds some incredible flavor to the ham and cuts through the saltiness. You’ll need the following ingredients:

This double smoked ham recipe is one of my favorite holiday entrees.

You can get your bone-in ham from Snake River Farms here.

As an Amazon Associate and member of other affiliate programs, I earn from qualifying purchases.

Did you make this recipe?

This site uses Akismet to reduce spam. Learn how your comment data is processed. 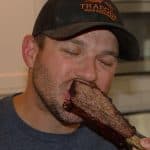 I love great BBQ. I started Smoked Meat Sunday to share my passion with the world and teach people just how easy it can be to create delicious food on a pellet grill.

If you love great barbecue, you’ve come to the right place.